The billboards which belong to the Konya’s Islamist Justice and Development Party (AKP) municipality contain a verse from the Qur’an calling upon believers to abstain from befriending Christians and Jews.

“…Do not take the Jews and the Christians as allies. They are [in fact] allies of one another. And whoever is an ally to them among you – then indeed, he is [one] of them. Indeed, Allah guides not the wrongdoing people,’’ the posters say, citing Quranic chapter five, verse 51.

Some Islamic scholars explain the verse, shared on the billboards without context, much like other verses of the Muslim holy book, was revealed in response to developments taking place during the time of Prophet Muhammad.

Officials from Turkey’s Christian and Jewish communities have not commented on the billboards.

Konya is known as Turkey’s most culturally conservative city where the ruling AKP won the March local elections with over 70 percent support. 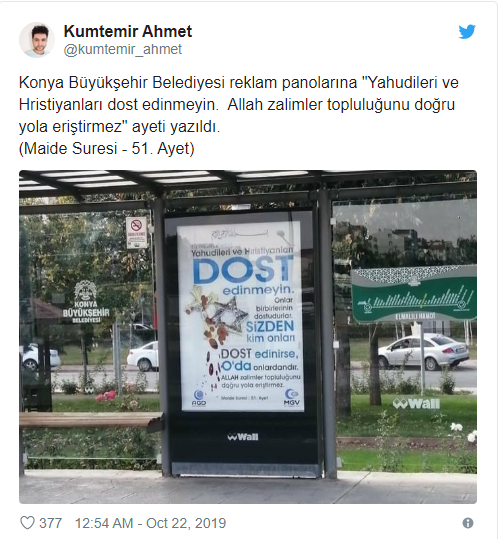