Australians are bracing for a dangerous and unpredictable night as bushfires are expected to worsen.New South Wales (NSW) fire commissioner Shane Fitzsimmons has warned of “volatile” conditions that could intensify the fires.

Hundreds of fires burned on Saturday, damaging power lines and cutting out electricity in thousands of homes.

Since September, fires in Australia have killed at least 23 people.

Dozens of people are missing and some 1,500 homes have already been lost this fire season.

Australian Prime Minister Scott Morrison has announced 3,000 reserve troops will be deployed to help tackle raging bushfires across the country.

He has been criticised for posting an advert on Twitter showing how the government is responding to the crisis, accompanied by an upbeat backing track.

NSW Premier Gladys Berejiklian said it was “very volatile situation” and “we are yet to hit the worst of it”.

“We are discouraging people from moving from where they are, given the serious threats and the fact that we have so many fires at an emergency level,” she was quoted by ABC as saying.

Some fire crews have been pulled out of the Snowy Mountains in the state of Victoria due to worsening conditions, The Guardian reports.

What happened on Saturday?

Skies reddened and darkened in areas of south-eastern Australia as wind gusts exacerbated the fires.

Temperatures surpassed 40C (104F) in some areas. In Penrith, west of Sydney, temperatures reached 48.9C. Some reports suggest it was for a time the hottest place on Earth. 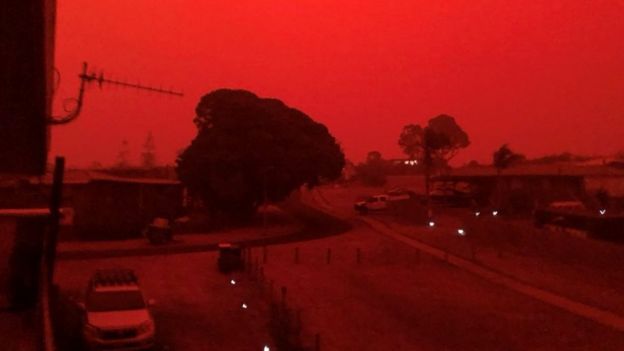 Almost a million more acres were reported to have burned in the state of Victoria alone, according to ABC News.

In the Batemans Bay and Moruya region in NSW, thousands of people are without power as a result of fire damage. Provider Essential Energy has warned this will continue overnight as it is not able to access the damaged area safely.

Emergency warnings were issued throughout the day urging residents to leave certain areas, while some were told it was too late to evacuate. They were instructed to find shelter.

NSW Transport Minister and Member for Bega, Andrew Constance, has compared the South Coast fires to “an atomic bomb.”

Fires on Kangaroo Island in the south of Australia killed two people – a well-known pilot named Dick Lang and his son, Clayton – after a quarter of the island was ravaged by fire.

What is being done to fight the fires?

NSW has declared a week-long state of emergency. Tens of thousands of residents and holidaymakers have been told to evacuate coastal areas, where a “tourist leave zone” has been declared.

Several organisations are raising money for relief efforts and people are giving generously.

The singer Pink has pledged to donate $500,000 (£382,000) to the Australian fire service after saying she was “totally devastated” at watching the crisis unfold.

The fires in Australia began in September. In addition to the fatalities, they have so far destroyed more than 1,300 homes, as well as millions of acres of bushland.

Meteorologists say a climate system in the Indian Ocean, known as the dipole, is the main driver behind the extreme heat in Australia.

However, many parts of Australia have been in drought conditions, some for years, which have made it easier for the fires to spread and grow.

Prime Minister Morrison has been criticised for his handling of the bushfires. He has faced persistent accusations of being absent, including by taking a holiday to Hawaii, and underplaying the role of climate change.

At a news conference on Friday, he said he understood that people had “suffered a great lot” and were “feeling very raw”.bbcnews