Regime says it is cracking down on anything linked to Fethullah Gülen, the Muslim cleric it blames for 2016’s attempted coup.More than 300,000 books have been removed from Turkish schools and libraries and destroyed since the attempted coup of 2016, according to Turkey’s ministry of education. 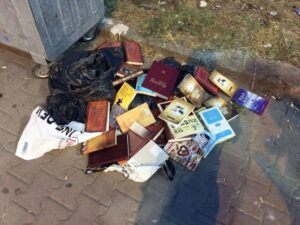 Turkey’s education minister Ziya Selçuk announced last week that 301,878 books had been destroyed as the government cracks down on anything linked to Fethullah Gülen, the US-based Muslim cleric who is accused by Turkey of instigating 2016’s failed military coup. Gülen has denied involvement.

The figure was first reported by the popular newspaper Hürriyet, with images of books being seized and burned published by online news outlet Kronos27.

According to the website Turkey Purge, which describes itself as “a small group of young journalists who are trying to be the voice for Turkish people who suffer under an oppressive regime”, in 2016 a maths book was banned for featuring Gülen’s initials in a question reading “from point F to point G”. In December 2016, Turkish newspaper BirGün reported that 1.8m textbooks had been destroyed and reprinted for containing the “objectionable” word Pennsylvania, which is where Gülen lives in a guarded compound. Streets named Gülen in Ankara have also been renamed, according to reports.

Free speech organisations said they were alarmed at the comments from Turkey’s minister of education. “In just three years, the publishing landscape in Turkey has been all but decimated, with 29 publishing houses shut down by emergency decree for ‘spreading terrorist propaganda’,” said PEN International and English PEN in a joint statement.

A 2018 report from English PEN found that, following the state of emergency decreed after the attempted coup, 200 media outlets and publishing organisations had been shut down, 80 writers subjected to investigations and prosecutions and 5,822 academics dismissed from 118 public universities. The report pointed to a “crisis of freedom of expression” in Turkey.

“The government has dramatically increased its influence on the media and publishing landscape, thereby silencing critical voices,” said PEN. “We call on the Turkish authorities to permit the reopening and independent operation of publishing houses, and to urgently end their far-reaching crackdown on freedom of expression, which continues unabated.”

… will these define the 2020s? This has been a turbulent decade across the world – protest, austerity, mass migration. The Guardian has been in every corner of the globe, reporting with tenacity, rigour and authority on the most critical events of our lifetimes. At a time when factual information is both scarcer and more essential than ever, we believe that each of us deserves access to accurate reporting with integrity at its heart.

We have upheld our editorial independence in the face of the disintegration of traditional media – with social platforms giving rise to misinformation, the seemingly unstoppable rise of big tech and independent voices being squashed by commercial ownership. The Guardian’s independence means we have the freedom to set our own agenda and voice our own opinions. Our journalism is free from commercial and political bias – never influenced by billionaire owners or shareholders. This makes us different. It means we can challenge the powerful without fear and give a voice to those less heard.

None of this would have been possible without our readers’ generosity – your financial support has meant we can keep investigating, disentangling and interrogating. It has protected our independence, which has never been so critical. We are so grateful.

More people than ever before are reading and supporting our journalism, in more than 180 countries around the world. And this is only possible because we made a different choice: to keep our reporting open for all, regardless of where they live or what they can afford to pay.

As we end 2019 and enter a new decade, we hope you will consider offering us your support. We need this so we can keep delivering quality journalism that’s open and independent. And that is here for the long term. Every reader contribution, however big or small, is so valuable