A lecture and photography exhibition by Prof Alex Morel called ‘Beyond The Water’ – a visual documentary tracing the silent and terrifying exodus of Turkish dissidents to Greece seeking safety from persecution was showcased in Sydney on Friday 13 March 2020. 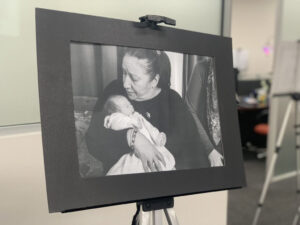 The Erdogan Regime and its harsh, unlawful crackdown on members of the Hizmet movement and all others it considers political dissidents, has caught the attention of academics, journalists and artists globally.

Advocates for Dignity (AFD) along with Affinity Intercultural Foundation co-hosted the event attended by a large number of diverse people at the city offices of Affinity. The program was MC’d by former ABC radio national host, Mr John Cleary, who set the scene for the event.

The welcoming speech was conducted by the Advocates for Dignity President, Mr Mehmet Saral, who said that the plight of the Turkish refugees who have been forced to flee to Greece, from the claws of the Erdogan government in Turkey, is a story that must be told.

He further said that there are refugees associated with Hizmet from Turkey here in Australia as well and AFD are here to help these people settle in to Australia, to integrate and to help them achieve permanent residency, as they have no other country to go to. Mr Saral said that AFD will be the voice for them in Australia.

Turkey is a country wherein freedom of speech is extremely restricted and where 319 journalists have been jailed, with close to 200 media outlets terminated by a series of arbitrary decisions taken by the Turkish authorities.

Mr Saral also spoke of his week spent in Greece mid last year, where he visited the refugees and saw first hand the financial difficulties the refugees experienced and how some even contemplated committing suicide as they could not bear to raise their children on the streets.

Thankfully, financial aid is now being given by the Red Cross and Turkish businessmen in Germany, enabling the survival of these families that have migrated to Greece.

Prof Morel began his lecture with a brief of the situation, describing the fleeing families that he met as leaving behind everything but hope while crossing the Martiza, the river separating Greece from Turkey.

He stated that across these waters, the families were met with the welcoming arms of their Greek neighbours, and the warm smiles of soldiers and others that were once thought of as their nation’s rivals.

Though he considered the entirety of his experience with these Turkish families was eye-opening and extremely memorable, Prof Morel enlightened listeners with the stories that resonated with him the most; moments he expressed as ‘being made eternal through photography, for others to contemplate’.

For security reasons, many of the individuals featured in the exhibition cannot be named. Instead, Prof Morel named all of the men in his photographs ‘Ümit’ (meaning hope), and all of the women ‘Sevinç’ (meaning happiness), explaining that these names were most fitting as each of them carried qualities of resilience, hope, happiness and determination despite their years of trauma.

Prof Morel explained that his craft was drawn to studying families of the Hizmet movement because of the importance they gave to education, and their hope and their willingness to open their hearts and homes to all.

“One thing I have noticed is the incredible patience and action of self reflection among the people within Hizmet, which is what has given the movement the ability to survive such difficulties”, he said.

“It was amazing meeting all these families in Greece, and to see how, despite all the trauma and difficulties and hardships, they were full of hope. I always remember someone smiling.”

The birth of Irini:

A touching photograph that forms part of Prof Morel’s photo-exhibition is that of a man, ‘Ümit’, and a woman, ‘Sevinç’, in a hospital; the man holding in his arms a new born baby. Morel stated that this was the first family he had met in Greece.

This couple were forced to leave Turkey as they had lost their jobs, were constantly receiving threats, and were facing the possibility of imprisonment for having associations with the Gulen Movement.

When ‘Sevinç’, the wife, was 7 months pregnant to the couple’s third child, they decided they no choice but to flee Turkey with their two other young children. For two and a half days, the family walked through the woods close to the country’s borders, and were smuggled across the Martiza for a hefty price.

As soon as they safetly made it to land, ‘Sevinç’ had to be rushed to the hospital as she had gone into labour. Having no command of the Greek language made the experience with the medical staff extremely difficult.

To their surprise, a kind-hearted Greek native who happened to speak Turkish, rushed to their assistance, aiding them with their communications with the medical staff.

This woman’s name was Irini. She stayed with the couple during the birth of their daughter, and visited them frequently after birth, having become like a godmother of the newborn. To honour Irini’s incredible efforts in assisting them, the couple named their daughter after Irini. Ironically, Irini means peace.

Prof Morel explained that stories of Greek natives opening their arms and hearts to such families were not unique, despite historic tensions between the nations of Turkey and Greece.

The story of Spiderman:

Among Prof Morel’s exhibition was also a photograph of a young boy, holding to the camera a notebook in which he drew Spiderman.

This young boy is Ekrem. He is seven years old, and had crossed the Maritza river on a cold winter night with his mother, father and two younger sisters.

On the families journey towards the river, Ekrem walked silently for seven hours without uttering a single word, so that his family would not risk being caught by Turkish authorities. He didn’t let anybody carry him, as his father was carrying a heavy load of their belongings, and his mother was carrying his younger sister.

When remembering him, Morel said ‘To me, that is the face of a superhero. If Spiderman took off his mask, he would reveal Ekrem’s face… I always think of him when I am preoccupied by my troubles and need to put things into perspective… What he did is the stuff of mythology to me.’ 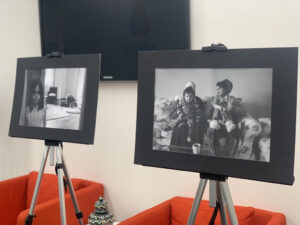 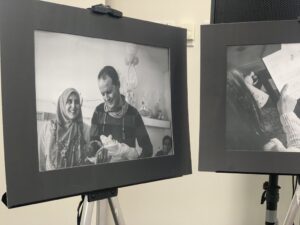