Judicial documents have confirmed that critics of President Recep Tayyip Erdoğan were spied on by Turkish diplomats in Czechia and were later the subject of a terrorism probe on fabricated charges conducted by a Turkish prosecutor.

The documents revealed how the information collected by the embassy was later used in a criminal indictment of critics and their families still living in Turkey on charges of terrorism.

According to a December 11, 2018 decision by prosecutor Birol Tufan, the Ankara Chief Public Prosecutor’s Office launched a separate investigation (file no. 2018/222852) into 10 Turkish nationals who were listed in espionage files dispatched by Turkish diplomats in Czechia without any concrete evidence of wrongdoing.

The investigation was based on spying files kept at the Turkish Embassy in Prague in 2016 and 2017. Tufan included three Turkish nationals in the investigation, which was launched in December 2018 and focused on opponents living in Czechia despite the fact that they had already left the country before that date. Those files might have been conveyed to the foreign ministry by Ahmet Necati Bigalı, the then-Turkish ambassador in Prague between 2014-2019. 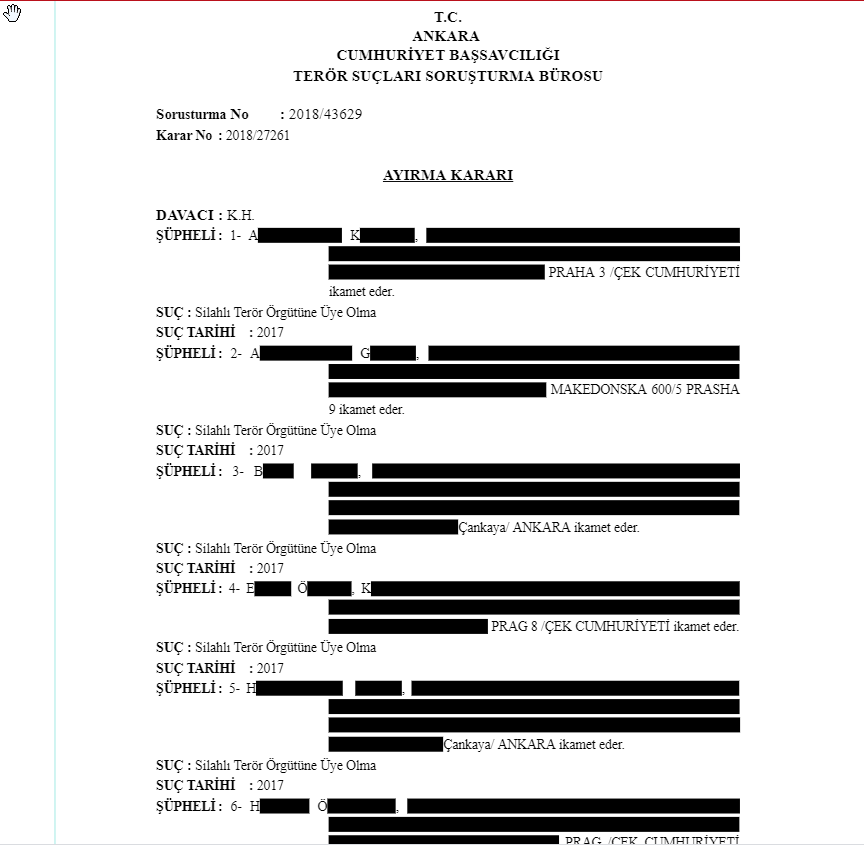 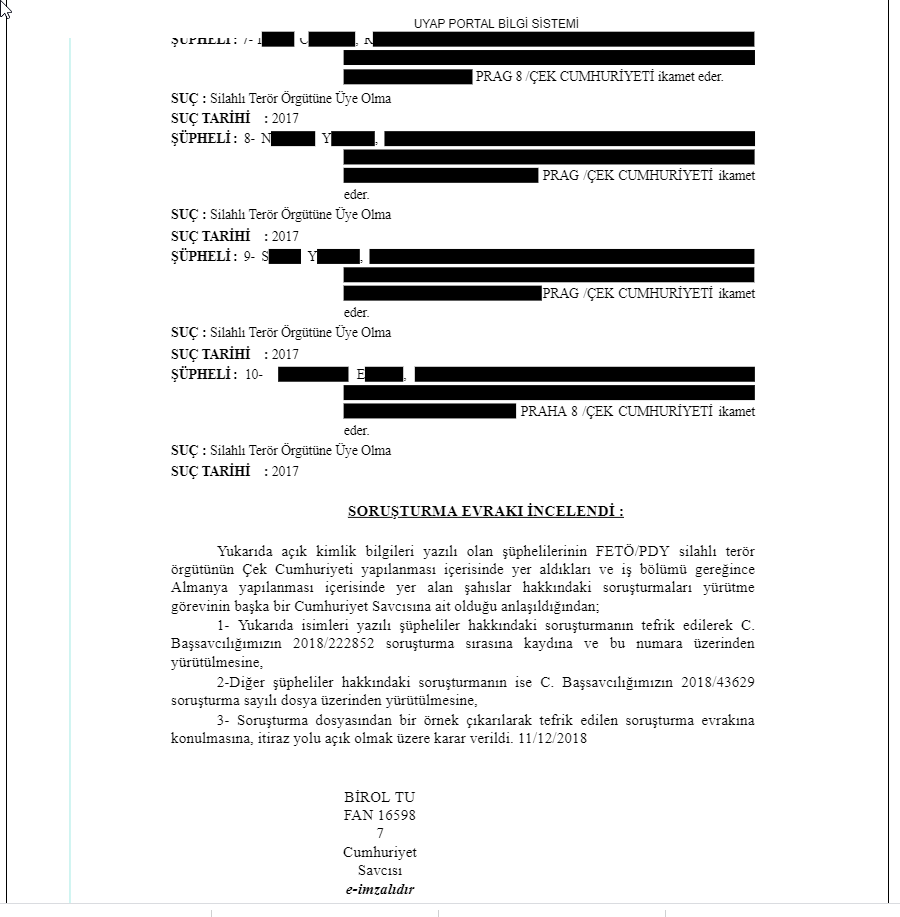 Judicial documents dated December 11, 2018 exposed how the spying activities of the Turkish Embassy in Prague triggered a criminal investigation in Turkey. (The names and addresses of the Turkish nationals have been redacted for security reasons.):

The documents once more confirmed that spying activities by Turkish diplomatic missions result in serious consequences in the Turkish judicial system.

Turkish diplomatic and consular missions around the world have collected information on Turkish nationals in line with a systematic spying campaign launched after a coup attempt in July 2016, listed their names as if they were part of a terrorist organization and transmitted it to headquarters.

As previously disclosed  by Nordic Monitor, the foreign ministry sent lists of profiled Turkish nationals in two CDs to the Ankara Chief Public Prosecutor’s Office, the national police and Turkey’s intelligence agency MIT on February 19, 2018 via an official document for further administrative or legal action, the punishment of their relatives back in Turkey and the seizure of their assets.

Public prosecutor Adem Akıncı, who received the foreign ministry document on February 23, 2018, forwarded the classified CDs including information on 4,386 Erdoğan critics to the Organized Crimes Unit of the Ankara Police Department for further action. The police conveyed the results of its investigations to the public prosecutor.

According to judicial documents released by the Ankara 4th High Criminal Court on January 16, 2019, the foreign ministry compiled a long list of foreign entities that were owned and/or operated by people who were seen as close to the Hizmet/Gülen movement in 92 countries in the Americas, Europe, Asia and Oceania. 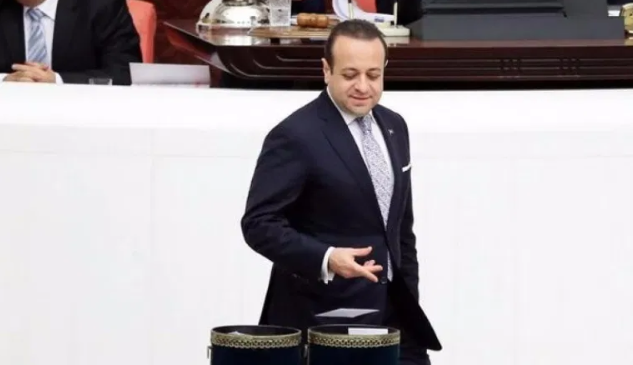 Turkish diplomatic missions continue systematic spying on Turkish government critics on foreign soil as confirmed by Foreign Minister Mevlüt Çavuşoğlu in February, 2020. Çavuşoğlu said Turkish diplomats assigned to embassies and consulates have officially been instructed by the government to conduct such activities abroad. “If you look at the definition of a diplomat, it is clear. … Intelligence gathering is the duty of diplomats,” Çavuşoğlu told Turkish journalists on February 16, 2020 following the Munich Security Conference, adding, “Intelligence gathering and information collection are a fact.”

In a recent interview with The Globe and Mail, Turkish Ambassador to Canada Kerim Uras also admitted to spying on 15 Turkish-Canadians. “Any embassy would focus on the threats targeting their countries. That’s what every embassy does,” he told The Globe and Mail.

It is clear that Turkish diplomatic missions violate the domestic laws of receiving states and the principles of international law by conducting unlawful information-gathering campaigns and sweeping intelligence operations. In the aftermath of the coup attempt in Turkey on July 15, 2016, some Western countries launched investigations into the spying activities on Turks and Turkish organizations overseas by Turkish Foreign Ministry personnel, representatives from relevant authorities, imams and intelligence officers accredited as diplomats.

In 2018 the Swiss attorney general launched a criminal inquiry into spying on Switzerland’s Turkish community by Turkish diplomats. The Swiss foreign ministry confirmed that the accusations outlined in the criminal proceedings were not diplomatic tasks and that therefore the people concerned couldn’t avail themselves of immunity. Two of them had to leave Switzerland as a result of the investigation.

In December 2016 Turkey had to recall Yusuf Acar, the religious affairs attaché at the Turkish Embassy in The Hague, after Dutch authorities accused him of gathering intelligence on the movement. Similarly, Belgian authorities rejected the visa applications of 12 Turkish imams seeking to work in the country in 2017. Recently, the government of the central German state of Hessen ended its cooperation with the Turkish-Islamic Union for Religious Affairs (Diyanet İşleri Türk İslam Birliği, or DITIB).

Today, Turkey’s Prague embassy is run by Ambassador Egemen Bağış, a former EU minister and chief negotiator for EU accession. Bağış was one of four ministers forced to resign on December 25, 2013 after the revelation of two corruption investigations on December 17 and 25, in which the inner circle of then-Prime Minister and current President Erdoğan was implicated. Bağış’s crucial role in assisting an Iranian businessman evade US sanctions on Iran was exposed both in the December 2013 graft probes in Turkey and in a 2016 trial in New York federal court.Nordic Monitor