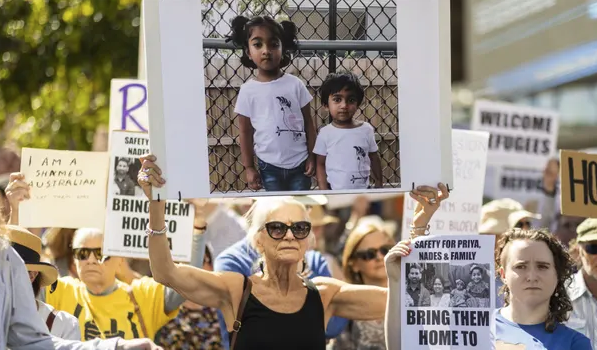 Anthony Albanese has spoken directly to Scott Morrison, urging him to stop the deportation of a Tamil asylum seeker family currently being held on Christmas Island, calling it “publicly funded cruelty”.

The opposition leader’s intervention came as thousands of people rallied in cities and towns across Australia on Sunday, including the regional Queensland town of Biloela, in a bid to force the government to let Priya, Nadesalingam and their two Australian-born children Kopika, 4, and Tharunicaa, 2, remain in the country.

Albanese said he had urged the prime minister to intervene, saying it was possible to maintain “strong borders without losing our humanity”.

“I’ve raised directly with prime minister Morrison the need for the immigration minister to intervene in this case,” the Labor leader said on Sunday morning.

“This would not undermine Australia’s borders. It would simply be the very reason why there is ministerial discretion in the Act, to show compassion, to show that there are specific needs for this family.

“These people should be settled here in Australia. It won’t undermine the government’s migration policies. It will simply say that this is a government that is prepared to listen to what the community are saying and saying so strongly.”

Nadesalingam and Priya fled Sri Lanka due to persecution and arrived in Australia separately by boat in 2012 and 2013. After living in Biloela for years, on 5 March 2018 the family of four had their home stormed by Australian Border Force officers accompanied by Serco guards and were moved to immigration detention in Melbourne.

At about 11pm last Thursday, the family was put on a non-commercial flight from Melbourne bound for Sri Lanka. On Friday morning after the plane landed in Darwin, federal court justice Mordechai Bromberg granted a last-minute temporary injunction, delaying the deportation of two-year-old Tharunicaa until next Wednesday when her case is set to be heard. The family were taken to a Darwin military base.

Late on Friday night, the family were flown from Darwin to an Australian detention centre on Christmas Island.

A broad coalition of voices has called for the family to be allowed to stay in the country. The Nationals MP Barnaby Joyce told the Sydney Morning Herald that the community of Biloela “seem to be pretty enthused about keeping this family there”.

“I think we should also be listening to them,” he said.

Sydney shock jock Alan Jones has also been vocal in calling for the family to remain in Australia, calling their potential deportation a “shameful chapter” in the Morrison government. In Melbourne, where the family were held in detention for nearly a year-and-a-half, more than a thousand people gathered around the steps of the State Library of Victoria to show their support, chanting “Let them stay,” before marching through the city.

“All I could hear in her voice … was the stress, the exhaustion and the fear.
“I asked her if she had a message and she said ‘we’re all alone here’.”

“As a Christian Australian, my message to our Christian prime minister Scott Morrison [is to] open your heart,” Keneally said.

Carina Ford, the Tamil family’s Melbourne-based solicitor, said she believes the family are the only detainees currently on Christmas Island and claimed “it may have been specifically re-opened for them”. 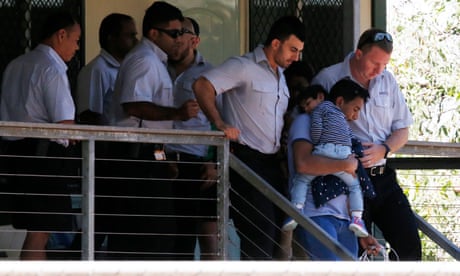 “I don’t really understand the motive of the Christmas Island move given that there are many other functioning detention centres in Australia, on the mainland,” she said.

“We are calling on the federal government not to deport the Biloela family. They are in real danger if deported back to Sri Lanka,” Refugee Action Collective’s Chris Breen said. “They have real claims for protection [in Australia].”

The move has created logistical issues for lawyers who are due to face the federal circuit court on Monday and federal court on Wednesday.

The federal court on Friday extended an interim injunction until Wednesdayas two-year-old Tharunicaa had not been assessed for a protection visa.

At the rally in Brisbane, the crowd lent its voice to a rendition of Twinkle, Twinkle, Little Star, while at a vigil in Adelaide, supporters chanted: “Let them stay.” In Hobart, advocates gathered outside the Tasmanian Parliament House building.

Albanese declined to reveal what Morrison had said in response during the “private conversation”, but said he had made plain his views on what he called “publicly funded cruelty on behalf of a government that really has lost touch”.

“We can have, very clearly, strong borders without losing our humanity,” Albanese said.

“I put my case strongly and said it was a strong view of the Labor party that we would support ministerial intervention by minister Dutton and obviously that he [Morrison] was in a position to give guidance to the immigration minister.”

But the home affairs minister, Peter Dutton, has consistently refused.

“I would like the family to accept that they are not refugees, they’re not owed protection by our country,” he told the Nine Network on Friday.

The case has been “comprehensively assessed” and reviewed since 2012, a home affairs spokeswoman added.

Speaking on the ABC Insiders program on Sunday morning, Labor frontbencher Tanya Plibersek said “common sense and compassion” should prevail. She called on Dutton to “use your ministerial discretion – let’s just let this family stay”.

“It’s a bit rich for Peter Dutton to talk about precedent when he’s prepared to use his ministerial powers to allow au pairs to enter the country.

“Ministerial discretion is in our immigration laws for a reason and it’s so that common sense can apply when there are strong compassionate circumstances.